In effort to bring all Bjite friends toghther, BJ Medicall College Alumni Association in the USA was registered as non profit organization and started in 1975

In effort to bring all Bjite friends toghther, BJ Medicall College Alumni Association in the USA was registered as non profit organization and started in 1975

With a deep sorrow, we would like to inform you that Dr. Sudhir Marfatia passed away on May 30 th , 2022, in Surat, India at the age of 80.
Dr. Marfatia graduated from BJMC in1965. Subsequently he did MS General Surgery pursued further training and  professional career in the same field in USA, After few years of practice in USA he decided to settle in his hometown Surat, India where he built a charitable hospital  took care of needy and poor.
Besides his professional achievements, he was very well liked by his peers & proficient in various sports which includes Tennis, Badminton, table tennis, cricket, and tracks. He won several trophies during his time in the BJ Medical college. He also represented BJ Medical College at the state and national level.
He remembered his old friends who ultimately settled in USA and visited them often. He is survived by his wife Geeta and four children. May Almighty rest the pious soul in
eternal peace. 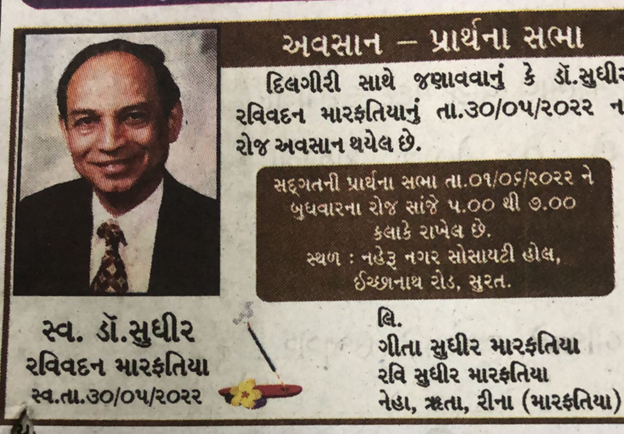 Hello all BJiets, I would like to share a success story regarding the recent inauguration of the Oxygen generation plant in Civil Hospital, Ahmedabad donated by B.J. […]

Pictures from Gujarati Physicians Convention  held on September 19 to 22, 2019 in sunny Orlando, Florida.

Dear BJiet Family, I am very grateful to all of you for supporting and electing me as a new president of BJMC Alumni Association, USA. I feel […]